Gnar Runners’ Black Squirrel is my favorite race of the year. My first official half marathon, and this year would be my third time running it in a row. What’s not to love? Though it is only a half marathon in length, you get to experience a bit of everything — a technical and fairly lung-burning climb (that always reduces me to a walk at some point… or maybe at a few points…), a tricky and technical rocky descent, rolling singletrack through fields of tall golden grasses, places where you can see just 10′ ahead and where you can see for over a mile, and short quick downhill to the finish.

And — and!! — after you’ve finished, a grand breakfast buffet awaits with generous vegan pancakes (YES!) and live music. Plus, it’s early September, so while mornings are getting cooler, you’re almost guaranteed sunshine and comfortable t-shirt, shorts, and sandals weather for the post-race festivities. And, since it’s a half marathon, you have grand fun and then are home with the rest of Saturday ahead of you by not much after noon.

After my fun-though-eye-opening experience at the Golden Gate Dirty 30 in June 2018, I targeted a few key opportunities for improvement for Black Squirrel, but also for general progress as a long-distance runner.

(1) Mental Preparation. One of the most challenging aspects of racing, for me, is running in a group on downhill or technical terrain. (That said, running with others is one of my favorite parts of a race, too, since I tend to run 90-100% of the time by myself. It’s a treat to be in a group who all started at the same place and are all headed to the same place together.) Knowing this was a challenge led me, when I volunteered this summer with the Sexual Assault Victim Advocate Center that took my Tuesday “lunch break run” time, to attend the Tuesday evening Reservoir Ridge Group Run, hosted by Fort Collins Trail Runners. I thought of going to this group run for about two years. (!) But I was sure I’d be left in the dust, hold everyone up, run silly, trip and fall, [insert limitless social anxiety-produced reasons here], it took me two years to attend one. I’m so glad I did. What a great experience it was to run with a group over uphill, downhill, and rolling trails. Everyone was kind and welcoming, and those runs were a highlight of my summer.

(2) Course-Specific Training. From Black Squirrel 2016/2017, I knew my most challenging section was not the 5ish uphill miles or 3ish downhill miles, but the 4ish rolling miles — especially the last 2. After you’ve been reckoning with technical trails and some kind of grade all race, to have the trail smooth and level makes the distance seem much longer. So, a few things. My Tuesday runs, thanks to the Group Runs, were on more technical terrain than I had been getting in my lunch break run time, which was grand. I also started working to get my Thursday runs on technical terrain also, and once I left my workplace in mid-August to go back to school (PhD here I come), my Thursday run would tend to be “two Maxwells and a Pineridge,” or, (2 x a 3.5mi out-and-back of 500′ ascent followed by 500′ descent) + (1 x 3.5mi of a rolling singletrack loop). This was a rough mirror to the Squirrel course, especially with the last rolling section. I also ran sections of the Squirrel course on my long Saturday runs, on my way around Horsetooth Reservoir or as the “lollipop” to a more out-and-back run starting somewhere east of the Reservoir.

(3) Pacing & Hydrating & Fueling. Speaking of those longer runs, I enjoyed extending my time-on-feet this summer to, generally, do a 3-week ladder of Saturday runs of 18-20mi, 20-24mi, and 24-27mi. I started getting more familiar with my hydration and cooling needs (one 27.5mi run that ended at 98*F helped me develop courage, or something, for sure). As those runs got longer, I became more efficient at shorter runs. I started using one handheld water bottle for runs of 12-14mi or less, with plans to use that instead of a hydration pack for Black Squirrel 2018.

About 3 weeks out from the race, I took my first tumble on trails in quite awhile — bruised and bloodied a knee, as well as lost a fair bit of skin on both palms and a shoulder, which rattled my confidence. I didn’t have to take time off running, but I did scale back my runs a bit (bonus tapering, I guess). I found myself much more hesitant going downhill, in particular, and wondered how that would play out on race day.

Because I had been focusing much more on distance than speed this year, my time goal was to come in under my first Squirrel time (2:22). I hoped to perhaps beat last year’s time (2:12), but, as I told my partner, “Expect me sometime between 2:05-2:25, and probably right in the middle of that range.” 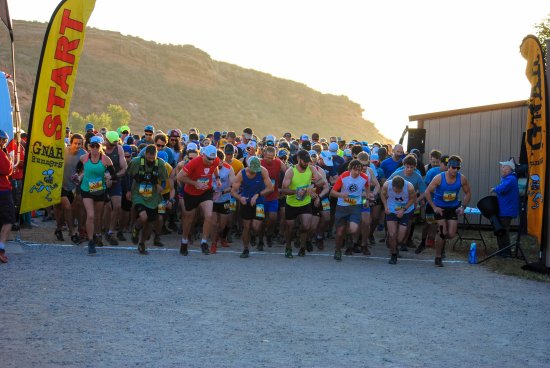 Knowing a sold-out group of 320 runners were to start the Black Squirrel 2018, we arrived early and, since my partner was volunteering, got placed into a parking spot within 50 yards of the starting line. About 30 minutes before the face, I had a Honey Stinger stroopwafel, and about 15 minutes before, I took a 10-minute warmup trot over the last half-mile of the course. With 5 minutes to go, I peeled off my long pants and sweatshirt — wouldn’t need them today, when mid-80s were predicted! — queued up about a third of the field back from the front, and off we went! 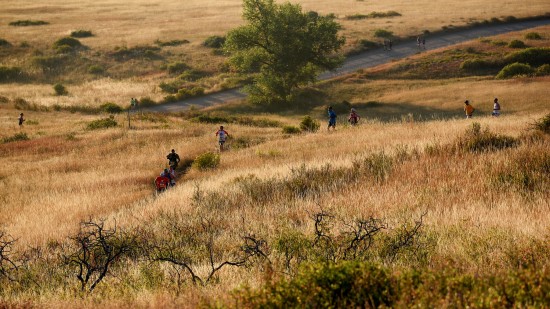 The first mile of the course is a dirt road loop, to stretch out the field before singletrack miles. Many folks in my place of the queue took off hard at the start, but remembering the Dirty 30, I kept to what felt like a comfortable 9:30-10:00/mile pace, slow enough to ease into the run but not so slow I’d be thoroughly trapped once we got into singletrack. Once we started ascending, the field thinned a bit more, and while there were moments a runner would be breathing down my back, the confidence and experience I gained during the FCTR Group Runs was such a help. I’d gladly and quickly step aside if they asked to pass, but otherwise, I’d just keep on, and trust that if they wanted to get around, they (as per race rules) would let me know. 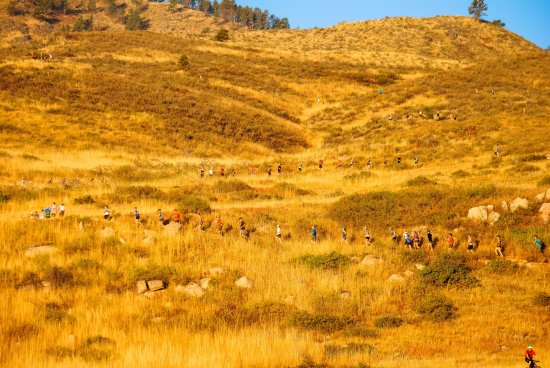 I got to the 4.5mi aid station, near the high point of the course, at about 50-55 minutes, which was perfect. The first stretch, because we climb 1500′ in about 4 miles, is the slowest, and while I was working, I was not panting and my heart was not racing. I had my vanilla bean Gu gel, took advantage of the switch to double-track fire road to find a convenient tree and hop back on course, easily (as per the double-track) passing the folks who had passed during my respite.

The next section, the 3ish miles of technical descent, was what had made my hands sweat leading up to the race — especially after my recent tumble. I kept my head up and feet quick and high, letting about 6-7 runners pass when they signaled on the way down, and, sooner and easier than I had expected, we were finished with what the race directors have described as a “bomber descent” in the course description, and I zipped by the second aid of the race, at 8.3 miles, feeling good. 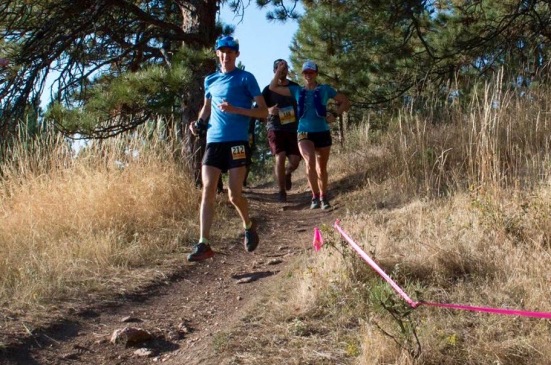 Now it was time to start speeding up, with about 5 miles left — a bit of descent, though smoother, and that long rolling return to the finish. With 3 runners on my heels through the 8.3mi aid, I started to increase cadence and stride out, and soon, I couldn’t hear them anymore. Because of my running on these valley trails during the summer, my confidence and place-knowledge was greater than past Squirrels, and that helped me relax into a comfortably hard tempo run-like pace through the final aid of the race, at mile 10.8. I glanced at my watch. I was almost 1:50 into the race, with 2.3 miles left to go. If I kept up with my pace of just under 10:00/mile, I’d finish somewhere between 2:10-2:15. But I sure wanted to set a new PR, and last year’s finish time (2:12) was right in the middle of that projected range.

So, I started zipping along, pushing toward 5K pace. Passed by 6-7 runners during the downhill, I passed 8-9 during the valley portion, especially from mile 10-13, heard my partner’s drumming at the finish line and knew I was close, saw the stretch of trail I ran before the race and knew there was a half-mile to go, sped up some more — and crossed the finish at 2:05! Finished in the top 20%, set a new PR, never fell, and felt stronger and stronger as the race went on. After cooling down then standing with my partner for the better part of an hour to cheer in runners, I got a plate of those delicious vegan pancakes.

Black Squirrel 2018 was my favorite Squirrel so far. In 2016, so much was unfamiliar and, while fun, was a bit stressful; in 2017, I started too hard, felt I used all my energy by the finish (though finished strong), and had to wait before I was able to feast at the end; in 2018, I felt I had more “breathing room” amid the runners during the race, finished strong, felt I gave it my fullest, but never felt ill/over-extended, and had a great fun time.

(1) HYDRATION/FUELING: For Black Squirrel, it worked out great to have about a half-cup of water and stroopwafel 30min before, then to carry one 12oz bottle and eat one Gu during, and take one nature stop around an hour in. I will do that for future half marathons.

(2) SPECIFICITY TRAINING: What a huge help that was. The “two Maxwells and a Pineridge” helped me prepare, physically and psychologically, for this particular race, as did running Lory trails whenever I could on Saturdays. The group running experiences were a tremendous benefit in helping me not stress about running in a group and giving me confidence as a runner.

(3) PACING: Start slow but aerobic and increase as the race goes on. Sounds simple, but I don’t always obey. I did that here, and that let me speed up as the race went on, so I finished strong and fast, and remained happy throughout.

Already looking forward to Black Squirrel 2019! Registration for that, and for all Gnar Runners races, opens 12/15/2018. 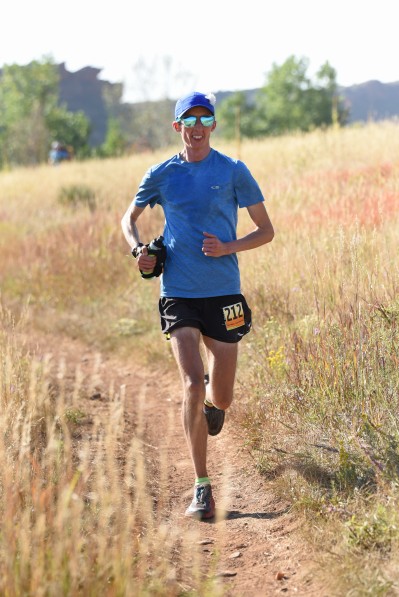